My players just wrapped up A Thousand Dead Babies by Zzarchov Kowolski and are eager to get to Boston (England).

I should really write up my players' time at the village of Corroc; they got a lot of great gameplay out of that small adventure and I would highly recommend it!

In preparation for their first trip to a city proper, I wrote up a d20 city encounters table with some help from the folks over at the LotFP Discord channel. I plan on rolling one of these automatically whenever the players return to Boston, and on a 2/6 any time they are traveling from one spot to another within the city. A lot of these encounters hint at larger conspiracies, adventures, and opportunities lingering just below the city's surface.

To be fair (and avoid persecution from the history buffs) 17th Century Boston only had a population of about 3,000; but I still wanna give it city vibes. London will be a different monster. I'm likely going to be sourcing much inspiration for London from Skerples's Magical-Industrial Revolution.

(players pls turn back here if u are reading) 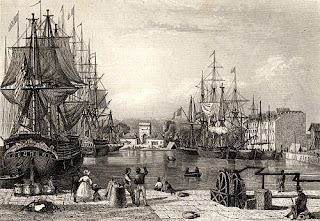 Encounters:
1. Lost
2. Lost
3. Lost
4. Bran Linklighter, notorious Legalist, being defenstrated by a group of disgruntled merchants.
5. Getting fined for dressing like a fancy lad/not dressing fancy enough.
6. Group of onlookers gather round as gamblers throw down pots of coin at a fighting pit featuring:
1. A pugilist from the docks and a foreign cut-throat
2. A mangy scottish wildcat and a pitbull
3. An aggressive cock and a scrappy orphan
4. Two scrappy orphans with broken glass bottles and a wild boar
5. A teenage boy and a chimpanzee
6. A bloodhound and 4 cocks
7. Military parade closes off a street
8. Market dispute turns in to a riot
9. Jeffrey & Johanna Meechum; Parlimant's "City Troops" stripping, searching, & questioning anyone who looks dangerous along with 1d6 other gurads
10. Quack Doctor Antony Throckmorton selling aphrodisiacs and leech treatments
11. Local pamphleteer and muckraker Stetson Branberry distributing incredibly vulgar satire on local elites
12. Father Edmund Atley giving a fire-breathing sermon recounting the King's many misdeeds
13. Maybel papley, a young pickpocket looking for a mark
14. George Fox and the Society of Friends preaching from a soapbox. 2d6 Parliament City Troops will arrive in one turn
15. Alabaster Hooke vigorously recruiting for the Chastised Devoted
16. A dog with two faces approaches the party & dies
17. A shipment of Stilton Cheese is immediately swarmed by lawyers, nobles, bohemians, & thieves
18. A small group of Puritan women, led by Joyce Oxenbrigg decry the morally reprehensible Cavaliers, blaming them for the blight on their city
19. A flirtatious dilettante, eager for stories from adventurous commoners
20. Lt. Francis Caron, recruting under Lord Baron's Banner for the parliamentary cause. Level 2 Fighter. +Level 1 Cleric and 6 Level 0 recruits

Note: I plan on removing one of the "Lost" encounters after every week spent in the city and replace them with whatever makes sense based on the PC's actions and interactions thus far.

Well there you have it! I don't know if anybody else will get use out of this but at least now it's here for easy reference for myself. Thanks!
at November 20, 2018 No comments:

Computer Interface for a Freight Elevator

This is a puzzle that I used in one of my Mothership games and I thought some other Wardens might find it useful. The computer terminal is p...