I'm not certain what this blog will look like in the future, but HOPEFULLY I'll get to posting some *Real Gamable Content* soon.

I started with the Dungeons and Dragons Basic Game back in 2004 with my dad and my younger brother and have been pretty much hooked since.

My first ~real~ campaign was in 2011 and I quickly picked up the DM mantle for my younger brother and our mutual friends.

Around 2013 I got in to Apocalypse World and various Story Games. Had a good BULLDOGS! campaign using the FATE engine and a handful of short pbta campaigns.

After traveling abroad for a bit, I found my way in to the OSR sphere around summer 2017 and haven't turned back since!

ANYWAY HERE'S A FAILED OCCUPATION TABLE
I've been using this for my LOTFP campaigns, statted out as such
Borrowed HEAVILY from lotfp666.tumblr.com 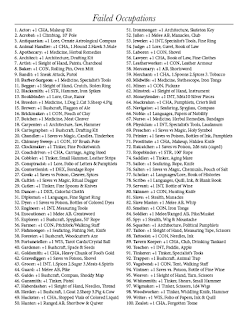 I'm new to this blogging thing so maybe I'll attach a HQ pdf if it's necessary!

Computer Interface for a Freight Elevator

This is a puzzle that I used in one of my Mothership games and I thought some other Wardens might find it useful. The computer terminal is p...